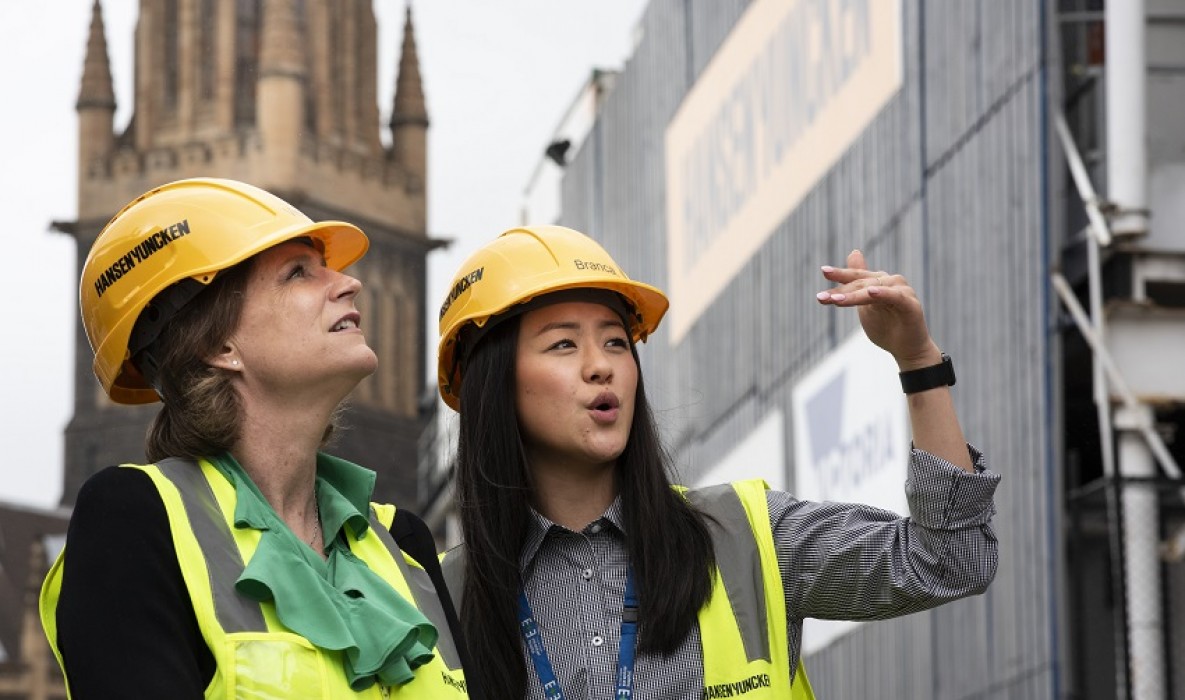 With construction flowing through her family history, Hansen Yuncken’s first female Executive Director grew up with a natural passion for building and design, but defying the family mould, she took the less obvious route to her now, dream career.

A fourth generation Hansen, Louise Hansen has ridden the waves of the 100-year-old national builder, experiencing the peaks and troughs of a cutthroat industry through the eyes of her father and grandfather. But for an 18-year-old female fresh out of Year 12, it wasn’t the most obvious or desirable choice. Unsuccessful in her application to study Architecture at RMIT and being too short-sighted to study at Deakin where she received an offer, she instead opted for an Arts Degree at Monash University.

It was here that Louise was hit with her first major lesson in life…. “Don’t despair if you are unsure of your career path”. Just 6 months into her degree, she deferred for a stint on the ski slopes, and then swapped the lecture theatre for a place at The Alfred Hospital to commence an unexpected career in nursing in 1987.

Louise’s ambition saw her move quickly through the ranks becoming Associate Charge Nurse of the Neurosurgery ward in record time, but her calling to the corporate world kept chiming in. Juggling opposite sides of the spectrum, she studied a Graduate Diploma in Business Administration at RMIT. Lesson number two, “Life can give you an education too”.

The start of Hansen Yuncken

After spending almost, a decade in a traditional female role of nursing, Louise needed a drastic change and took a leap of faith into the unknown, “the family business”.  She was offered what was meant to be a short-term role working with her father, Peter Hansen, who was Managing Director at the time. Replacing his recently retired secretary, the role was aimed at giving her a glimpse into the corporate world.

Unchallenged by her newfound role as the Managing Director’s Secretary but enjoying the opportunity of working in the family business, Louise soon found her passion for the Pre-Construction and Business Development side of the business. This provided her with the opportunities to develop her network and to really start to thrive in the industry. This is where lesson three took hold… “Be honest with yourself about your ambitions”.

“Now I have to admit, Hansen Yuncken is a family business, but nepotism works both ways.  It can get you an "in", but you have to prove yourself twice as hard and I had what I considered the two "Fs" working against me: I was female and family”.

A seat at the table

Over the past 25 years, Louise has seen Hansen Yuncken move from strength to strength, becoming a pioneer for change within the construction industry. She has also witnessed a dramatic shift in diversity, with more women than ever taking their seat at the table.

“Construction is not always a top choice for women, but it’s dynamic, it’s straight shooting and you have the opportunity to be involved in something tangible and fantastic.”

Throwing herself wholeheartedly into the industry with ambition and sheer determination, Louise graduated from the Australian Institute of Company Directors Course before becoming Hansen Yuncken’s first female Executive Director in 2013.

Louise’s role as a Board Member has seen her help navigate Hansen Yuncken through treacherous industry activity. “I really enjoy having an active involvement in the direction of the company, which is now much larger than when I joined, and playing a part in the strategy for its continued improvement and success.”

The century of Hansen Yuncken history doesn’t weigh on Louise’s shoulders, “Taking Hansen Yuncken into the next century is as much about maintaining the culture and acknowledging the impressive history, as it is about helping to shape the future of the construction industry and particularly the role that Hansen Yuncken will play in it.”

Louise’s working life hasn’t been without its challenges; career driven, she has battled the guilt of being a working mum with two beautiful daughters, and from the outset realised the need to accept support when it was offered. A demanding role with high pressure deadlines and interstate travel means that a supportive network is fundamental in maximising time at home with her family.

“In this day and age, women don’t have to do it all, and we are not failing if we can’t. Its ok to spend precious time with your children without the guilt of everything else and most importantly, learn to say no.”

A trailblazer for women

An active member of the construction community, Louise is a well-known and respected figure head  within the industry. From her past roles with the National Association of Women in Construction as the Victorian President and National Director, to her founding membership of the successful TEN Women networking group in Melbourne to her most recent appointment as a Non-Executive Director of Incolink, Louise is the first to fly the flag for female careers in construction, amplifying her peers and the success of those within the national business, leading nicely into lesson four, “It’s ok to be a strong woman”.

“There is around a 13% participation rate of women in the construction industry and no matter how much we talk about it; female student rates are static. Being a woman in the construction world has been a rewarding experience. Construction is a fantastic industry. You are involved in something tangible and concrete. There are so many opportunities from Construction Management, Project Management, Architecture, Engineering, Quantity Surveying, Acoustics Engineering, Interior Design, Landscaping, even Legal and Financial, there are so many facets to the industry and it is just so rewarding. Yet it is also hard work.

I have a passion for the industry, not just because it’s in my blood, but because statistics show that more female representation within an organisation can result in greater success.

These days I don’t feel any different about being a female in the industry. I’m proud to say there are lots of us, both in our offices and on our sites, and we are respected because we are good at our jobs.”