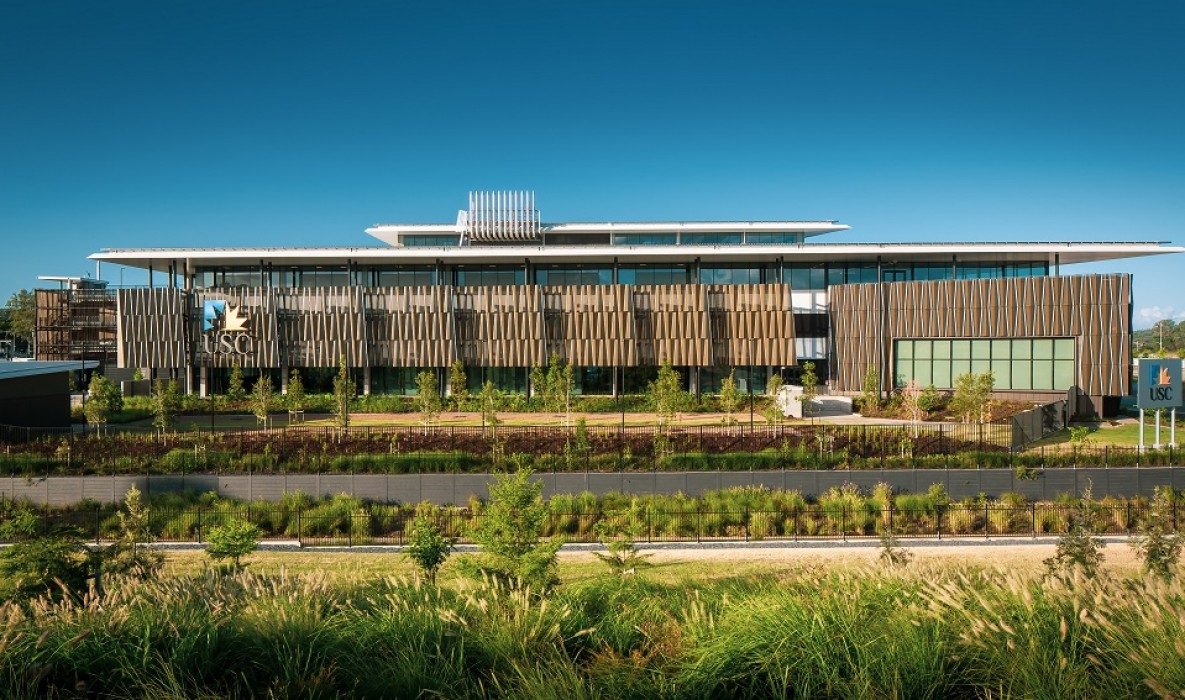 Shining a Light on Learning

The University of Sunshine Coast Moreton Bay is the first federally funded university to be built in Australia, and the first greenfield university campus to be built in the last 14 years. Its Foundation Building, developed together with the Moreton Bay Council, is the largest, and most ambitious project ever undertaken by the university. With students already enrolled, everything hinged on practical completion in time for the start of the university academic year which commenced in February 2020.

The Foundation Building redefines what a world-leading education facility looks like. Its learning spaces support teaching models that are becoming more collaborative, flexible and interactive.  “The building is a landmark for the community, and was acknowledged as possibly the best example of a contemporary higher education facility by senior Federal politicians. Hansen Yuncken deserves some credit for this outcome,” says Dr. Scott Snyder, the Chief Operating Officer for the university.

So how did we do it?

Any delays to the programme could disrupt or delay the start of the school year, so extensions were simply not an option. The construction programme had to be closely monitored and managed at every stage of the project.

“When a client decides to work with a construction company for the first time, the thought can be daunting, especially with so much at stake,” said Justin McGrath, Senior Project Manager. “Constant communication, transparency and a commitment to accountability allowed us to earn our client’s trust and respect. As a guaranteed maximum price, our relationship with our client was fundamental in ensuring the contract sum was not overrun.”

“The project presented many obvious risks, the first step in addressing this was a strong working relationship between the builder and the University. The relationship between the Hansen Yuncken project team and the University’s representative on-site, was a positive working one, with both sides prepared to listen to each other’s concerns and adjust accordingly,” said Dr. Scott Snyder. He added, “Various challenges presented during the project, including weather, overseas suppliers, fitting the building project within a larger precinct development schedule, and managing contractors. The solutions to some of these were not straightforward, occasionally requiring overseas travel, [and] after hours work.”

Subcontractors were all aware of the aggressive nature of the programme. “We made sure they understood the constraints from the get-go and only brought on those that had the manpower and resources to work across multiple faces.” Each team was accountable for their contribution to achieving the programme, with around 200-person workforce at its peak.

“It was truly a team driven effort, that wouldn’t have been achieved if we didn’t commit and work together, as a group,” said one subcontractor. While another cited, “The teamwork between trades was something I have not seen before … there was no way we could have delivered the same outcome, within the timeframes without this culture that Hansen Yuncken had built.”

To reduce pressure on the university and provide confidence that the delivery schedule would be met, each floor was divided into separable portions. The Ground floor (Portion 1) was delivered at the end of January, including the auditorium which was not due for completion till the end of February – handing over 6 weeks ahead of schedule. Floors 1 and 2 (Portion 2) were delivered mid-February, with the rest of the building (Portion 3) at the end of February. These staged handovers allowed the university to start occupying the building and be prepared for the start of the semester.

In delivering the project under budget, it was essential to maintain the intent of the overall design. By working closely with the architect and the university, Hansen Yuncken was able to find alternatives to add value and reduce cost.

IT and AV were designed inhouse by the university with their own consultant who was novated across to Hansen Yuncken. The equipment in the building was procured directly by the university and pre-wired and tested at their Sippy Downs campus to make site installation and commissioning less of a programme constraint.

For the external façade, Hansen Yuncken sourced a powder-coated aluminium curtain wall with a bronze look that mimicked the look of anodised aluminium. The end result remained faithful to the original design while providing a material that was cheaper and easier to maintain in the long term. Similarly, an alternative high-impact resistant plasterboard was incorporated, reducing cost while improving long-term maintainability.

If you’re planning to build for education, give your project a head start by contacting our QLD Business Development Manager, Chris Kenvyn first on 0427 142 507 or email ckenvyn@hansenyuncken.com.au