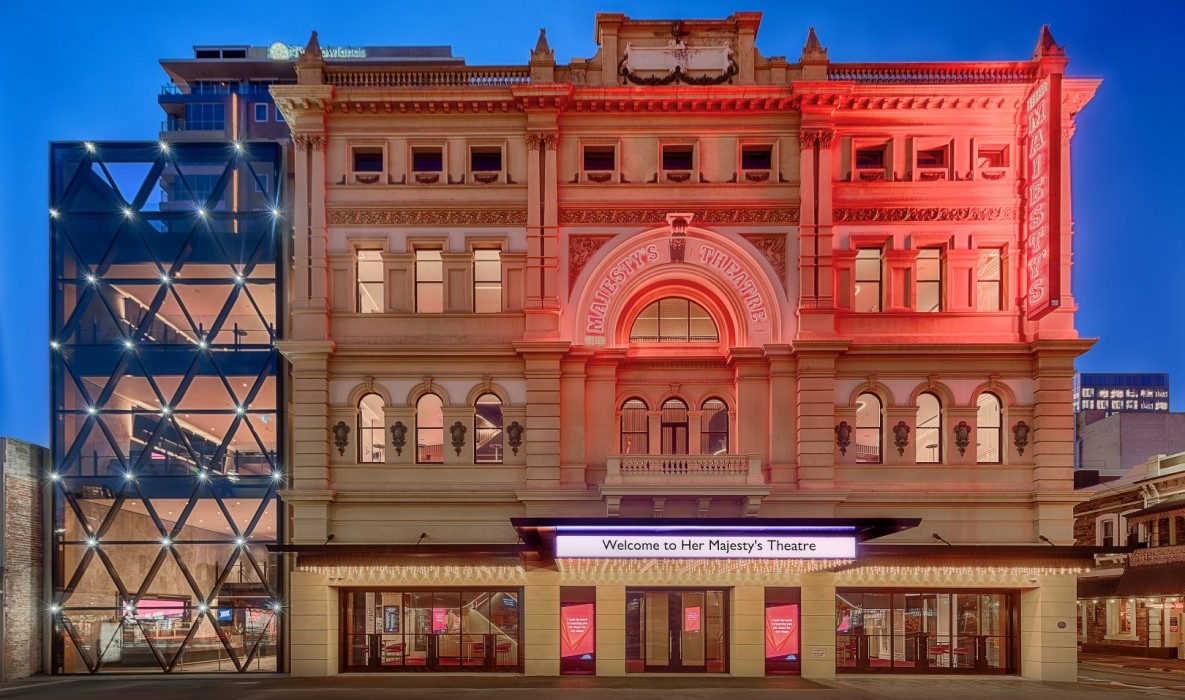 Hansen Yuncken has handed over yet another world-class entertainment venue, Her Majesty’s Theatre in the heart of CBD Adelaide.
The $66m redevelopment of Her Majesty’s Theatre (HMT) was returned into the capable hands of Adelaide Festival Centre on 6th May 2020. Completing the works on behalf of the Department of Planning, Transport and Infrastructure and Department of Premier and Cabinet. Hansen Yuncken (HY) engaged a 90% South Australian (SA) work force utilising specialist artisan contractors and local craftsmanship.
Cox Architecture’s design philosophy paid homage to the building’s heritage, seamlessly integrating unique heritage characteristics with classic contemporary design. Respecting the theatre’s history, elements of the original 1913 build have been delicately incorporated resulting in a more considered and respectful design solution.
Combining classic methodologies with modern technology
Utilising modern day BIM technology to inform an interfaced design was fundamental to the project’s success. Point cloud surveys combined with point scan and digital design data allowed a fully integrated design solution within the existing heritage facades.
With a knowledge of heritage works spanning over 100 years, the HY team brought a unique level of skill and expertise to this complex and intricate build.
Her Majesty’s heritage façade and eastern wall required a detailed engineering methodology to protect and stabilise during demolition. Requiring 54.6t of steel and over 400t of concrete, the façade retention bracing was painstakingly installed to minimise any damage or impact throughout the redevelopment.
The design process was managed through BIM with models created for prefabricated elements to smoothly transition pieces from workshop to site. By prefabricating safety onsite was improved, and reworks avoided. Due to the sheer size of several of the steel elements, prefabrication was the only option, some requiring police and South Australian Power Networks escorts to raise the power lines along the route allowing the truck to safely pass under.
SA craftmanship creates Edwardian flair
From the outside, it would appear little has changed for the Grand Old Dame of Grote Street, but behind the scenes, a brand-new facility awaits theatre goers and award-winning performers. Featuring modern Edwardian custom joinery throughout, the joinery was a once in a lifetime undertaking for JRCM Commercial Joinery. To bend the timber to form the balconies of the auditorium, JRCM worked closely with SA Structural to create a steel skeleton to curve the timber around. Each curved balcony was hand-made and the attention to detail is evident.
Capturing signatures of famous performers from over four decades, the signature wall was one piece of historical significance to preserve. Each brick was numbered and catalogued during the removal process; this system was invaluable when it came time to reinstall. Leaving a lasting legacy for future generations, the signature wall has been relocated backstage giving a friendly nod to future performers.
HY managed a workforce of 150 people at peak, with a total of over 1,000 people inducted throughout the project, a focus on behavioural safety drove safety performance and culture. Suicide prevention was a major focus for the project with over 80% completing Mates in Construction (MIC) General Awareness Training. Those interested progressed to the next two stages of MIC training, leading to the project receiving MIC Accreditation.
With the current environment, it is uncertain when the public will get to experience the new and improved Her Majesty’s Theatre. We know that when that time comes, everyone will appreciate the quality of the finishes throughout and she will once again be a drawcard for the revival of the arts and entertainment industry.

In the meantime, for a glimpse behind the heritage facades, take a look at our timelapse capturing the project from beginning to end: