Turning art on its head: Celebrating a decade of MONA

Celebrating 10 years since the Museum of Old and New Art (MONA) opened its doors, a little nostalgia has kicked in as we reflect on one our greatest achievements - building a remarkable building, for a remarkable client.

Designed to showcase David Walsh’s extensive art collection, MONA holds a special place in our heart as the largest privately owned museum in Australia. Working on a private building for a private collection, for an individual who required the flexibility to make significant changes during the construction process, is a very different experience to most projects.

Charged with the right people with the right skills, Hansen Yuncken managed this intense and fast-moving project, which was an exhilarating experience for all involved.

‘It was a great thing to walk around the museum with David Walsh – you got a whole new feel for what we were doing and why. He would come and go fairly quickly on site – he didn’t like to hold us up. Despite changes to the building to accommodate new ideas or acquisitions, David also made things a little easier for us at times. There were a number of situations where things looked a little bit raw or rough-and-ready. The usual tendency is to smarten it all up – to make it straighter or neater – but David would say, “No, I like it just like that”. A good example is the sandstone wall. In the middle part of the site, the sandstone is very hard, but at either end it’s quite soft. So, once it was cut and exposed to the rain and the air, it opened up and cracked and became unstable in places. From time to time, pieces would come loose and repairs were needed to stabilise the face. At first, we tried to colour-match the repairs with the sandstone, but again David said, “Don’t disguise it. Don’t pretend it’s something that it’s not. I’m happy for it to be concrete.”

The tunnel that connects the museum to the library is another great story. We’d erected the first precast concrete panels at the end of the museum – the very first ones – and had worked through an extensive prototyping process to get them right. We were standing there looking at them when David said that he wanted to build a tunnel to connect the museum to the library, and that would mean breaking in through these brand-new panels. If we’d known about that a few weeks earlier, we could’ve created a nice neat opening in the panels while still in the factory. But he said, “I don’t want that. I want this tunnel to look like it’s been smashed in through the end of the building”. He also told us he had a particular budget in mind to build the tunnel. The architect went away and did some preliminary drawings and we did some cost planning based on the sketches, but our figure came back above what David was prepared to spend. We sat down and talked through the allowances. One was for the structural element to form the tunnel – David said he just wanted it to look like a pipe, like a stormwater pipe. So, the question was, can we actually use a stormwater pipe to form the tunnel? We saved a little bit of money that way. There was also quite a lot budgeted for lighting. Again, David questioned why there was so much in the cost plan for this, because he’d envisaged that his tunnel would be dark and have a subterranean type feel. We ended up with one light.’

‘David was still buying pieces of art through the construction process, and as these pieces arrived a home had to be found for them in the museum – things were often changed and added. For example, at the library the Kiefer Pavilion was purpose-built for a particular large sculpture by Anselm Kiefer, which was purchased during the works. Towards the end of the project, artists became more involved. Installing their pieces of work became a project within a project, and members of our site management team worked closely with them throughout the process. Working with an artist rather than a subcontractor had its own challenges. Subcontractors working on our sites are formally engaged and required to comply with certain contractual terms. They need to provide insurances and comply with safety standards. Many of the artists hadn’t been exposed to that type of environment previously. We had to navigate through this in a careful and reasonable manner. It was another challenge and we had to find a way to make it work for a successful project. Understandably the artists were very passionate about their pieces.’ — Matt Cadle, Operations Manager

'When we were working on the early works for MONA, we engaged Jenkins Earthmoving to do the excavation for us and one of the tasks was to saw-cut that amazing internal sandstone wall. There was a 20- or 25-tonne excavator with a tooth blade on it, and there’s this one guy, Craig Nichols, driving the machine. The sandstone needed to be cut down progressively and it was a slow process. So, it was the one driver in that excavator with the saw. He worked day in, day out, weekend after weekend. Eventually, after many weekends of work, Craig says to his boss, “You know, I’m thinking of taking a weekend off”. Tim, his boss says, “Mate, that’s fine. I think you’ve earned it” and he replies, “Okay”. Then Tim pipes up, “But we’ve got to keep going with the job, so I'll get so-and-so to jump in the machine on Saturday”. And Craig says, “No, you’re not doing that”. It was his job. He had such ownership of that part of the project that he didn’t take the weekend off. I think that’s a lovely story on a number of scores, because mainly it’s about ownership and a passion for the job. We still have people in the industry who are passionate about what they do. Would that excavator driver have actually brought that passion to his everyday work? Perhaps not. But giving him something special or something different to do, like carving the MONA wall – well, that’s different. And I thought that was pretty wonderful.’ — Bruce Maher, Tasmanian State Manager 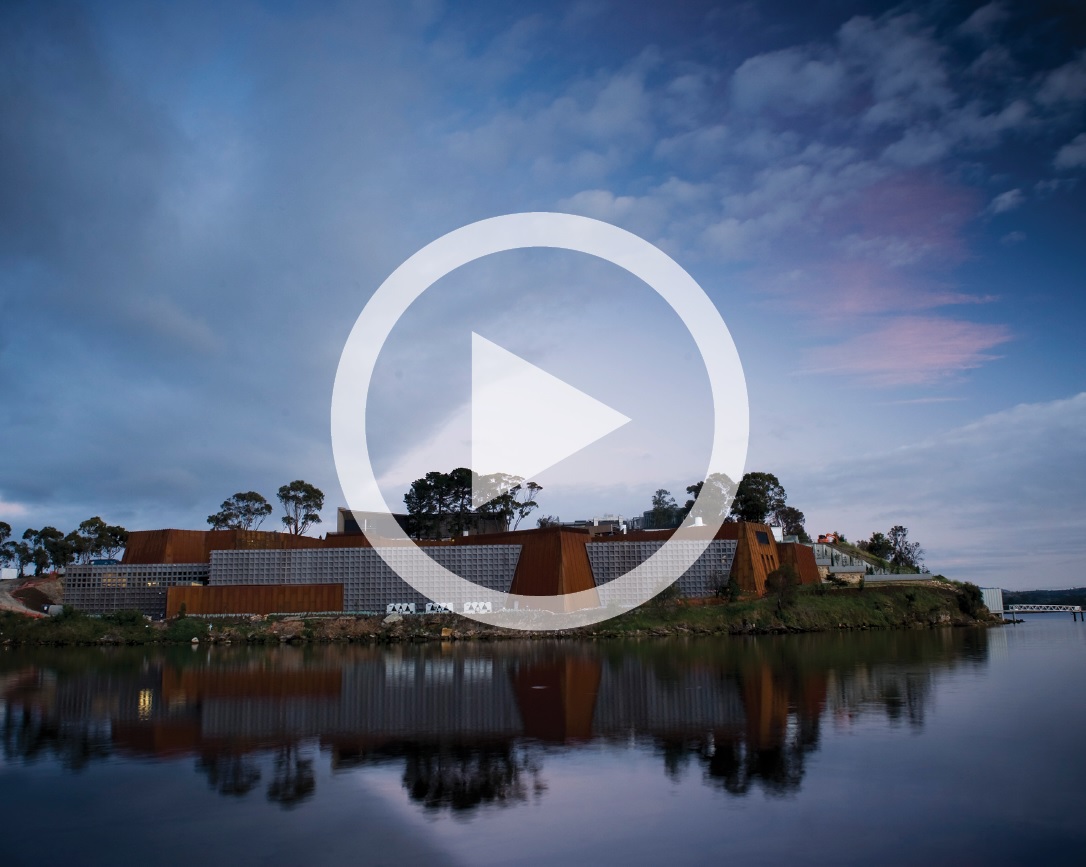 Find out more about MONA